She’s been quietly destroying the girls skate scene for over 6 years now (just been re-reading an old Crossfire interview with her back from 2006) and she continues to pop up all over the radar – last month she was in Sidwalk Mag for her performance in the UK Girls Jam (2nd in sponsored section), this month she was in the magazine again for her performance in the Girzilla World Cup Skate event (2nd of all UK riders), she took 1st place in the Crawley Jam last month, she also spent three weeks teaching and helping on the Rubicon Skate Camps, and has now signed up with new Birmingham Skate Company: Spread Eagle. We catch up with Emma Richardson… 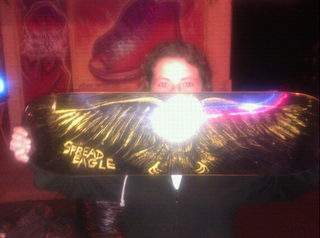 So Emma, who is your new sponsor? How did you hook up?
Spread Eagle. I’ve known Tommy D (the boss) for years, partied with him quite abit and general Birmingham havark through the years.

What’s the new team going to be up to?
Ha! No idea, not really sure what i’ve signed up for! On the first trip the team manger Dave Glover got sectioned then lost his car, and Tommy got cautioned by the police. I think the main idea at the moment is getting a few adverts out, sell a few boards and clothes. There are plans for tours, people keep telling me they know of a weather spoons called spread eagle so deffo be good to do something with that. 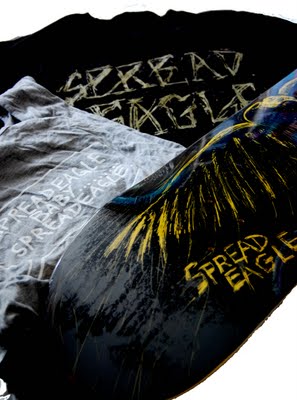 Who designed the first deck? What about the clothing and stickers?
Tommy D, all Tommy D baby! But I think the plan is 2 get other people keen to draw something raw and rad for it as well. There all hot shapes working closely with ken and joel at A Third Foot to get things perfect!

Was it hard to leave (previous sponsor) Rogue? What made you do it?
Yes it was hard; Jenna’s not just a team manager but a rad friend too! But I left because I think it’s the right time, and Jenna now has room for a new young cluck on the team so be good to give the opportunity to someone else.

Do you think it’s better to be part of a ‘mixed’ team than an all girls one? (Or doesn’t matter)
I don’t think it matters; the boys that are on the team are Neil Bailey, Jake Smith and Marcus Palmer they are all supper lovely and extremely talented young chappers! All Birmingham rippers at the moment everyone skates in their own style, skates different objects so I guess when we’re together we can all help each other out progress giving tip and stuff.

Is there a website, where we can check the latest shenanigans?
Watch this space, something is on the way!