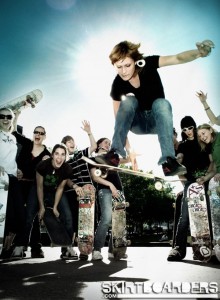 Skirtboarders is an all girl skate crew based in Montréal. SkaterGirl catches up with Mathilde on who they are, why the Mexico tour was so great, who the up-and-coming talent is and why we should all skate the big O and never sleep…

So you met in Montreal in the Summer of 2002 – what were you all doing there?
Most of the girls were from Montréal’s area. At the same time, there was a few girls from BC who just moved to Montréal plus a french canadian who lived 5 years in California and moved back to Montréal. We all met each other through other people and we naturally started to gather and skate together. It was so much fun to finally be a group of girls skating the streets of Montréal together! (Photo by :: Jocelyn Michel)

How soon after did you setup Skirtboarders?
Not very long! We spent the summer filming for our first video production (Boy Vidéo – 2003) and then we made the first version of our website. We needed a domain name so we bought skirtboarders.com! That’s pretty much were the name comes from… But the crew itself had grown and changed for the past 6 years. Girls from 17 to 36 years old now hang out together, share some tricks and some laughs. It’s amazing how much fun we have all together, even though we are all very different in age and level!

What do you all do in terms of comps do you enter?
Because we are a crew rather than a company, our events have always consisted of travelling together, organizing roadtrips, etc… There’s an organization here called “Rugged Riders” that’s specialized in girls events through skateboarding and snowborading. We always participate in their comps because we don’t get many girls events here in Canada and the Rugged Riders annual Chicks Flip Out contest is always so much fun! 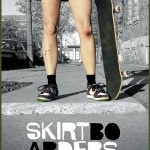 Have you ever made a film?
Yes – “Skirtboarders, Le Film” – it features all the crew members plus a few friends. (pictured)

What are your local skateparks like? Is there a good girls skate scene?
We don’t have much decent parks in Québec Province. This is why I think it’s suprising to see so many girls coming out of here. I guess being such a big group inspires more local girls to get into skateboarding. 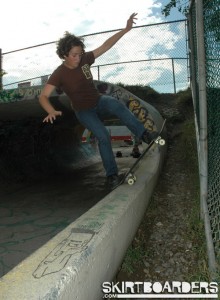 Best spot you’ve ever skated?
I’m not very good at it but I’d have to say Montréal’s Big O for it’s unique flavor. It’s a full pipe and a mini-ramp at the same time that was constructed as the entrance to the soccer field for the Olympics of 1976. It’s so nice out there, you can spend a whole day hanging out in the grass, skating once in a while, getting beer delivered from the corner store, eating picnics… Fun times! (Rider :: Frédérique Luyet :: Trick :: blunt to rock fakie :: photo by Louise Hénault-Éthier)

How did you get into skating?
It was 11 or 12 years ago. There was not much to do in my home town for the kids so my brother, my friends and I all bought a skateboard to have something to do. I’m the only one who kept skating thought! haha!

Where has it taken you in the world?
Lots of places! Pretty much everywhere in north america, France, Spain, and Mexico… I wish the list was even longer but it’s not over! 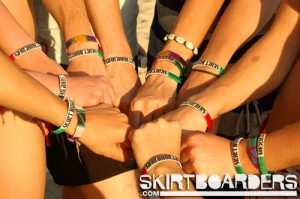 What’s been the best moment for you and Skirtboarders?
Mexico, definetly! (pictured) It was such a fun time, being all together in a different Country! It was the first time we went this far all together and first time we did a real tour. Lots of people were awaiting us at each stop. It was very surprising at first! We made tons of new friends and we hope they will come visit us now! (Photo by Louise Hénault-Éthier)

What things do you think would really help improve girls skateboarding?
More recognition. The scene needs to have more quality medias like
videos and magazines to inspire more girls to get into skateboarding.
Not so long ago, it was so unusual to find a picture of a girl while
flipping the pages of a skate mag! All that to be said, lots of people work hard to make it happen. By example, Lisa Withaker (girlsskateboardingnetwork.com, Getting Nowhere Faster) and many others girls around the world who work very hard to organize events, promote girls or produce medias…

What superpower would you most like to have?
Being able not to sleep so I could have more time to do everything! 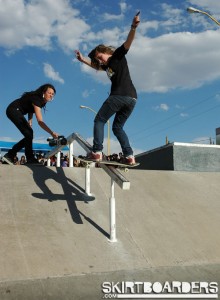 Skateboarder to watch out for?Éloïse Théorêt! She use to be very shy but sooooooo talented! She recently came out of her shell and realised she could push it further by being less shy. (Rider :: Éloïse Théorêt :: Trick :: Fronside Boardslide :: Photo by :: Louise Hénault-Éthier)

Worst skate crash?
Sprained ankles… but nothing so bad. I spend more time filming than
actualy skateboarding now. But sometimes I get my skin cutted by flying boards while I am busy looking in the lense of my camera though! hahaha!

What can we see from you and Skirtboarders in the future?
Maybe another tour in a near future… So probably another webTV show covering the tour!

Any shout outs or last words?
Keep skating, as long as it makes you smile!