SkaterGirl is stoked to bring you an exclusive interview with Sophie Friedel. 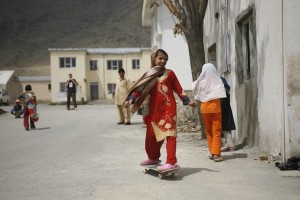 Back in December, Sophie became the first female volunteer to travel out into the thickst of the action, Kabul (Afghanistan) and take her place working for Skateistan for 6 months. Skateistan is first and foremost a co-educational skateboarding school that engages the growing numbers of internally displaced youth and provides them with new opportunities in education, cross-cultural interaction and personal empowerment. Through skateboarding, Skateistan hopes to equip these young men and women, to lead their communities towards social change and development. Here Sophie talks to us about – helping children escape from the corruption and war, being the only woman at Kabul Airport, why skateboarding works so well as a medium, scrambled egg Christmas dinners and how every day should start with a good cup of coffee.

Ok, start by telling us a bit about yourself and what you did before embarking on this mission…
I am Sophie, 25 years old and originally from a lovely and tiny farm village in Bavaria, Germany. When I was 16 I wanted to learn English and moved to the UK and lived in Gloucester for a while. Later I studied sustainable product design in Falmouth, Cornwall. I had a fantastic time down there and love the place. I missed snowboarding lots when I first moved to Falmouth but a good friend of mine introduced me to mountainboarding and from there I got into sliding, bowl and mini-ramp skating. Before working with Skateistan I managed a restaurant and lived in Berlin where I did an internship at an action sports magazine. 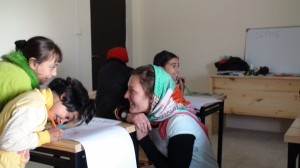 …and then you started this adventure abroad. What is your role in Skateistan?
At Skateistan I am a Project Officer, International Instructor and Finance Officer. I do all sorts of organizational work, writing on a skate park operational manual and teach skateboarding and English to Afghan children between 5 and 17. 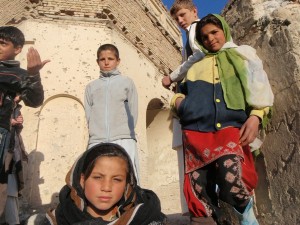 What’s an average day like?
An average day is difficult to define at the moment because things are still changing. We have morning and after lunch sessions where children have classroom based lesson in English and soon in other subjects too, followed by a skate session. In between those sessions we have a lot of organizational and logistic stuff to sort out. I am most likely to start the day with a good cup of coffee, our morning meeting starts at 8am our office hour go until 5pm. I try to get a skate in after work or meet up with friends.

What’s been the most rewarding thing for you so far?
There is no one day where I can say it’s been most satisfying as life here goes up and down a lot and a day could be the best and worst all in once. What I find rewarding though is the glow in the kids eyes when they come to the park, the way they run to the class room and the enthusiasm they portray when learning English. The kids help and support each other well better than I’ve every seen during my time at school. I find it rewarding to talk to young Afghans who want to get away form corruption and war but want to help their country to be a better place.

It seems like a very positive but intense environment. Have there been any scary moments?
Actually the flight and the first 30 minutes of landing at Kabul airport. The departure in Frankfurt was bizarre. I was by far the youngest person on the gate, only two other women, both journalists and the rest where man in their 40’s and over, either in Afghan clothing, military or related to the media. No one was talking and there was heaps of tension in the room.

The arrival was stunning, we flew over all those mountains and the rising sun was coloring the snow in the most amazing tones. Waiting for Oli and Max to pick me up made me nervous, as I wasn’t sure what to expect. If felt like everyone was staring at me and I was the only women by myself and on top of that one of the only Westerners. All I knew where all the terrifying news from the German media and people telling me I am mad for coming here. All I could think thank was: Shit man you now in Kabul!!, That was scary! So far it has not been frightening again and I love it here. 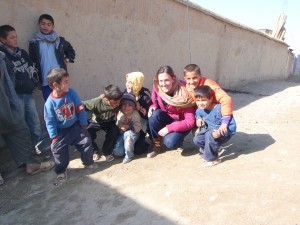 How did you spend Christmas and New Year?
Nothing like a traditional family celebration! Scrambled eggs for X-mas dinner (looong story) and a French Beach party with a tonne of sand on the dance floor – aswell as some man wearing only Speedos!!! New Years eve started with Champagne and proper German potato salad and finished with lots of crazy dancing.

Other than skateboarding, what other things are you into?
Back country skiing and boarding, finding adventures, exploring new cities and countries, outdoorsy stuff, doing Stencil art, design, sewing, sketching, reading, cycling … lots of stuff

Why do you reckon skateboarding has worked so well at engaging the youth in Afganistan?

Skateboarding works so well here because it is very new and has not yet got any schemas or cultural boundaries attached to it. It is for everybody no mater what age, ethnicity, religious or socio-economic background. Ethnic and economic lines divide most neighborhoods in Kabul. Consequential children do not often mix with other backgrounds, resulting in prejudice and discrimination towards other. We try our best to mix Pashtuns, Tajiks, Uzbeks, Hazaras and Turkmen, educated and uneducated as well as rich and poor children between the age of 5-17. It is great to see working street children with parliament children getting along in the skate park. 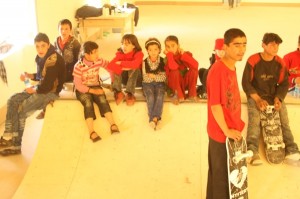 I guess we all love skateboarding for it’s chilled-out-ness and lack of rules…
Popular Sports in Afghanistan involve violence and competition such as bodybuilding, marshal arts, Buzkashi (a bit like rodeo but more towards horse fighting), as well as cock, dog, bird and camel fighting. Common team sports are cricket and football and they are both very male dominated. Skateboarding on the other side is non violent, non competitive (can be) and a way of personal expression. Traditionally children/teenagers here are used to do what they are told and are not used to think for themselves. Skateboarding helps them to express themselves in a personal way, teaches them to accept others, and keeps them active and fit

So skateboarding lets you reach out to boys and girls in a unique way?
Skateboarding is more like a tool that helps us to expose children to educational, health and cultural opportunities. We have two class rooms equipped with a heater, windows, chairs and tables where we teach lessons in languages and other subjects and where we hold projects in health education, theater and art. 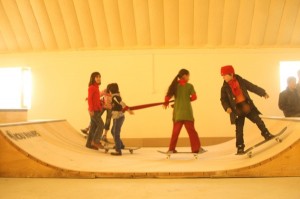 Girls are not allowed to ride a bike, as it is culturally inappropriate for them to have something between their legs! And are often not allowed to participate in team sports as they are normally held outside and are being watched by others. Skateboarding is seen as a sport for boys and girls, which is fantastic. We have two girls only days in the park and give girls student priority.

What does life hold for you after Skateistan?
Not sure yet to be honest. Like to work in a sport related environment and continue to study a master degree.

Any words of wisdom for our readers?

Thanks shoutouts for anyone?
Thanks to my family and friends for believing in me.

Cheers Sophie. Keep up the amazing work. Huge props from the SkaterGirl family.