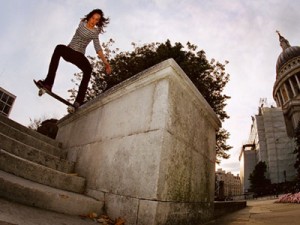 This year she came from nowhere to win the under 18’s section at the Girl Skate Jam UK in St Albans with an array of tricks the sponsored laydee’s would have been extremely proud of!

Known as “Hell” to her mates you’ll find this girl encouraging them to hit up spots at 4am (AKA ridiculous-o’clock!!) just to be able to get the chance to skate a banned area.

With the legs of a Danny Wainwright, Helena’s willing to give everything and anything a go regardless. Her eager attitude towards skating means she is a photographers dream! And naming no names they will shamelessly exploit her like a performing monkey, with a needless repetition of tricks that she will never complain at, to get their shot – sorry. With whispers of sponsorship for this emerging talented youngster, she is definitely one to watch for the future. 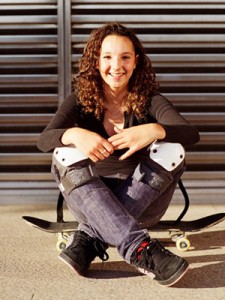 How do they say hello in Cockney wherever it is you’re from?

Alright Helena, Safe yeh? Any other good slang then?

You’re another of these skate sugar abusers, the secrets obviously in the sweet stuff – being good at skating that is?

It’s all in the Starbucks Coffee Based Caramel Frapuccinos – £2.90!

So you’re part of the Greenwich Crew what are the spots like round there?

There are some really nice spots but they’re quite touristy. So it’s hard to skate without using the sentence ‘Sorry my board went into your ankles, are you ok?’

Canary Wharf is one of your local spots, it’s pretty darn amazing, but what’s up with the security “jobs worthy” guards (I was made to delete all my digital images in front of them as apparently it’s illegal(?!?) to photograph skateboarding at Canary Wharf – luckily they did not spot the film camera hah hah!!!) Are there always so many of them wandering around in packs looking so gormless?

Yep! Have nothing better to do really! They threaten to confiscate your boards and they escort you to a train station or bus stop so they know you won’t come back and make their day hard work. But if you really get on their nerves, they give you a ticket meaning you can’t go anywhere on the Canary Wharf site again for 6 months. But I wouldn’t worry because they never pay attention to the tickets and so you can just go back there like usual and then get chucked out again. 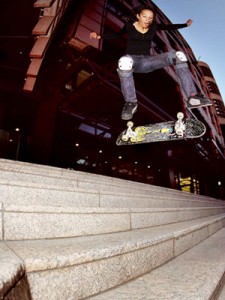 You and your friends got up at 4am one morning just to be able to skate there, that’s real dedication!! Then you became a Tesco hobo?

Well there was this one time when we really wanted to skate this spot in Canary Wharf. Even though it was 4 in the morning there was this one security guard who kept walking up and down the road leading around it. Luckily there were these huge pillars which we hid behind, moving from one pillar to another behind the strolling security guard. When we eventually managed to sneak past round the corner we got to skate for a good 15 minutes at this treasured spot. After we got kicked out we got hungry and decided to go to Tesco’s, but as it was around 5:00am and Tesco’s opens at 8:00am, we decided to go to sleep for a bit outside the shop. Not the best sleep but a sleep’s a sleep!

Everyone who knows you talks about your enthusiasm; you’re kind of the skate equivalent of a Mr Motivator.

Well heaven is a halfpipe.

The first time I came across you is when you blasted into first place at this years Girl Skate Jam, you pretty much blew away the rest of the competition. Was that your first big comp?

It was indeedy! I thought the turn out was amazing, and the amount of effort put in to the comp was amazing! I’d never seen as many girl skaters in one room at the same time. The only other girl I’d ever seen was a girl about 7 years old on a Barbie skateboard slowly being pulled along by her dad.

What tricks did you do?

Urm…blunt nose grab out on the quaterpipe, boardslide down the rail, 50-50 on this box out from a bank, indy grab 180 from the roll in to the bank and a pretzel flip …that’s all I can remember!!!

Well I was thinking quite hard recently and have thought of kick flipping into a blunt and then finger flipping out. It will be really hard to get but if I get it that would be the best trick ever!

You then proceeded to come joint first in a mixed mini comp at Bay66 that’s pretty cool?

Yeh that was quite an experience but he (the other competitor) beat me on the deciding round unfortunately. But that was a lot of fun. I’ve been looking for other comps everywhere just to enter and try out, not bothered about winning because they’re just so much fun themselves, winning is just a bonus!

I’ve heard on the grapevine there’s some sponsorship coming your way, that sounds pretty exciting…

So where do you want to head with your skating – travelling, sponsorship meeting people?

Ooooh that’s a tricky one, urm well…skateboarding is just a hobby but I’d love to extend it by travelling to places with great spots that would be great and making friends on the way would be even better! I don’t see myself making a career out of it but if I could, now that would be the greatest opportunity, doing something I love for a career!

Sam, she started this great opportunity, Jake and Joe who got up at 4am for me and everyone else who has always supported me in this sport, there are a bunch of names I could list but it take way too long!