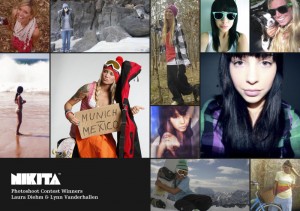 As you know the Nikita Photoshoot Contest has been underway to find two ladies to join the Nikita crew in Mexico for the SS11 photoshoot which is going on right now. There was a fantastic response as always with over 150 girls e-mailing from literally every part of the world. Nikita’s boss and head designer, Heida Birgisdottir, and International Marketing Manager, Geiri, had their work cut out sifting through all the entries and selecting just two girls to participate but the winners have been chosen:

Read more about both girls…

21 year old Laura spent some time putting together the photos for her entry. She’s a ‘true Bavarian girl’ at heart, originally from Zittertal, Austria but has spent the last 14 years in Munich. She works at a big skate shop in Munich and has a French bulldog called Charlotti. This will be her first trip out of Europe and she’s looking forward to joining the Nikita crew and team as one of the faces of the SS11 catalogue.

Lynn, 19 years, also sent in some really cool shots of herself that showed how relaxed she’s going to be in front of the camera, it literally loves her! The dark haired Belgian was pictured in some great landscape surroundings and has been known to traumatize some sheep by running after them. In good company then.

Nikita are stoked to be meeting the girls in Mexico and not even the recent volcanic eruptions in Iceland will stop them!