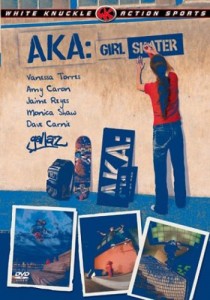 AKA: Girl Skater (2003) is a documentary about 4 female professional skateboarders on a skateboarding tour in Australia. This documentary follows Dave Carnie (from Big Brother Skateboard Magazine) as he leads pro skaters Amy Caron (2002 World Champion), Vanessa Torres (2002 Skateboarder of the Year), Monica Shaw (Australian Champion), and Jaime Reyes on a tour of Australia, visiting a variety of skate parks and tourist attractions. The film features the skaters doing demos at some local skateparks and signing autographs for locals. There are also scenes of the skaters visiting a local zoo.

The film climaxes at the Gallaz Skate Jam in Melbourne, Australia, where the street course is won by Amy Caron. At the time, this contest was the largest prize in women’s skateboarding, with Caron winning a new car.

While the film features some skateboarding, it should be viewed more as a documentary of the culture of female skateboarders, as opposed to a technical skate video. This is the first major skate film to focus solely on the progression and culture of women in skateboarding, by highlighting a select number of top female skaters. “Given the current standard of women’s skateboarding, a film that finally gives a voice to this subculture, and the phenomenal athletes that represent it, is well overdue,” says Mike Hill, director of AKA: Girl Skater.

SG’s Note: Even ignoring the all-star lineup, the phenomenal footage and crazy fun antics, the team provides a rare and fascinating insight into the unique and rapidly emerging youth subculture that is girls skateboarding. There are no rose-tinted glasses here and many of the struggles and challenges of the industry are laid bare – not to mention the rewards crucial to a career in professional skateboarding. As they say on the video, “See the face of modern skating change before your very eyes.”…