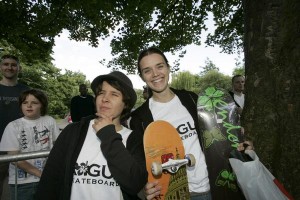 After a week of rain it was nice to see the sun out again – and just in time for Skate-O-Rama. This event took place in Brighouse near Bradford, at possible the strangest little skatepark – comprising mainly of 2 launches, a box and 2 rails and a dodgy quarter and no bank (boohoo). Anyway the Roguesters Laura S and Jenna Selby decided to mission up – and what a mission. Laura left from nr.Cardiff and drove to Leicester, after a string of ring roads in the city centre and an illegal u-turn she got to the station, to pick up Jenna. They then got lost getting out of Leicester, but eventually made it onto the motorway – running rather late, but eventually arriving in Brighouse by about 2ish, Laura with a serious case of stiff legs after driving since 9am that morning. 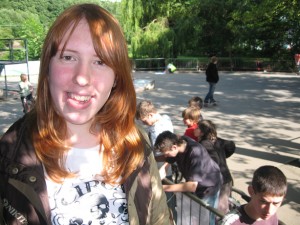 We soon discovered we where the two only girls except for a very young girl called Abi. We had a chilled warm up, where Laura skated well, doing some fakie half cab boardslides and switch 5-0 on the small rail, the nerves seemed to get the better of Jenna in the warm up and she took quite a bad slam. The tables turned during our 3min run. Laura landed a hand-plant on the quarter and some fakie 180 rocks as well as a bs boardslide on the rail and some flatland flips. She came close to a fakie 50-50 180 out on the box and fs boardslide and 50-50 on the rail, but unfortunately just couldn’t pull them off. Jenna had a solid run though and did a nice noseslide on the box, a feeble stall and fs rock on the quarter aswell as a shovit on the big quarter and a fs boardslide on the rail.Abi the little girl who was skating in the warm up decided she didn’t want to enter – so her mother entered instead (and she could ollie, not bad for a mom!). The comp was very chilled and relax except for everyone having to wear the helmets and looking abit silly (safety first girls and boys). 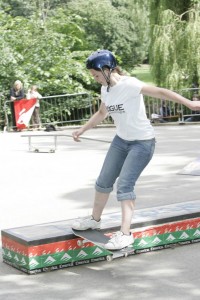 Jenna took first in the end (baging herself a v.nice board) with Laura 2nd and Abi’s Mom in third. The sponsors included Nikita and Vans + others and there where some local bands providing some live music. Laura manged to pull the 50-50 on the rail after the comp but Jenna took a another slam which involved a swollen wrist and a visit to the St johns crew for an ice pack. It had been a long day but loads of fun. Now for the big drive back and Laura’s old skool mini was doing well. So in the go we car and drove off in the wrong direction only realising when we nearly hit Liverpool and had to drive all the way back in the Leeds direction – taken back almost and 1.5hrs. Jenna eventually got to Leicester train station by 9pm and Laura got back home after 12pm. Tired and worn out but stoked – just hope more girls come next year and a big shout out to Katie for organising it! 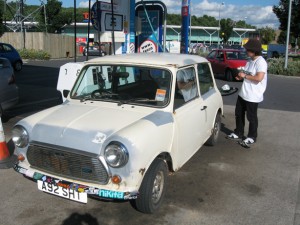