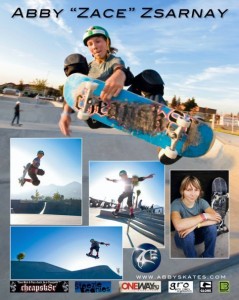 SkaterGirl caught up with the amazing young talent Abby “Zace” Zsarnay. Alerady this year she has competed in the Florida Bowl Riders (World Cup Skateboarding sanctioned) in March and took 2nd place overall for the 2 day event for the females. In April she competed in the Basic Bowl Am and took 2nd Place. In May she competed in the Woodward West AmBush Series and took 2nd in the Mini Ramp, 2nd in Vert and 1st in the Street Comp. And in May she was invited to perform a Skate Demo for the Pleasant Valley Skate Park “Rock n Skate” Day. A busy and impressive start to the year for anyone!!

But at just 16 years old, it’s particularly amazing as Abby then told us what she has planned for the rest of the year… training to compete in the remainder of the World Cup Bowl Series Events. The S3 Super Girl at Woodward West, The Oregon Trifecta, The Tim Brauch Memorial Bowl in San Jose, Ca, Pro Tec Pool Party Am/Female Event, Rock the Cradle for Johnny Romano Bowl Comp in Houston, The Vegas Invasion: Ladies Bowl Contest, and I’m sure several other comps that pop up throughout the summer!!! 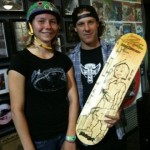 Just to put things in perspective though, we did ask Abby what she does when she’s not skating – and like a lot of I guess, she is usually doing homework for school, hanging out with her friends and family, and when she gets a chance she likes to surf. She also likes to make Duct Tape bracelets and wallets for fun. 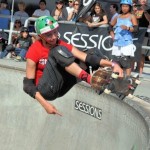 Back in 2009 she skated the Tim Brauch Memorial Bowl in San Jose, California during the World Cup Bowl Series (see Front Side Air pic left) and having just got her own deck from Cheapsk8r (see pic above right), the future looks bright for Abby and we’re sure she will continue to be an inspiration to other girls out there. You can friend up with Abby on Facebook or keep an eye on her YouTube channel.

Check out the video from the 2009 Concrete Rodeo…

Her advice to other girl skaters? (source: the lurkersintention) Keep trying even if you fall. Just get back up and try again. Don’t give up just because you get frustrated or mad because you fell or can’t land something. Once you get frustrated, everything is going to become so much harder. Take a break from that trick, try something else and come back to it later.

My name is Abby Zsarnay. My friends call me “Zace”.

I started playing around on a skateboard at the age of 7 when I took my first Summer Skate Camp at Skate Street in Ventura, CA. I was totally hooked. Four years later at the age of 11, I entered my first Skateboard Competition. The following year I joined the California Amateur Skateboard League (C.A.S.L.) and started to compete on a monthly basis. My first year in C.A.S.L. I started out the season in 20th place out of 24 skaters in the Street Division (I was the only girl). By the end of the 2007 season I had moved up the ranks and finished in 8th place overall out of 21 skaters. During the 2008 season I started to do more than just Street Competitions and was entering everything that was offered: Bowl, Vert, Mini Ramp and Whole Park. Not only did I compete in the monthly C.A.S.L. Competitions I took first place in the Sony Playstation Am Jam Comp for Vert Ramp at Woodward West. I was the first female in the history of Playstation running the event to make it to the National Finals, which was held at Woodward East in Pennsylvania.

In February of 2008, I was spotted by John Grover from the One Way Board Shop, in Ventura and was offered a “Flow” sponsorship. That summer I traveled with my Dad for 2 weeks to compete in the Concrete Rodeo Skateboard Tour. Traveling through Oregon and on to Idaho for the National Finals where I ended up taking 2nd place in the Nation for the females. In November I was approached by Bob Grijalva of Cheapsk8r.com who offered to sponsor me. For the CASL 2008 season I finished the year in 5th Place in the 2A Division. In December, I flew to Seattle with my parents to compete in my first competition against Pro Female Skaters, hosted by Skate Like a Girl. I took 5th place in that competition and was the youngest skater.

This past summer of 2009 was an amazing season. I was invited to compete in the S3 Supergirl Pro/Am at Woodward West. What an honor! I ended up winning the title of “Top Amateur” which earned my spot as the only “AM” at the All Pro S3 Super Girl in Venice Beach where I placed 10th out of 18 skaters. I also won the 2009 National Championship for the Concrete Rodeo Skateboard Series in South Jordon, Utah and took 1st place in the Wicked Wahine Burger Bowl all girl Competition. As for C.A.S.L, I finished the season for the Sponsored 13-15 year olds in 2nd place for So. California.

I’m looking forward to the 2010 season where I’ll be competing in the World Cup Bowl Series, along with as many other Pro and Pro/Am competitions I can. Thanks to all my sponsors this past season, Cheapsk8r, One Way Boardshop, Steezie Beanies, Girls Riders Organization, BambooSK8 & Globe Shoes.  I practice skateboarding every day and I just love to skate. When I’m not skating, I’m either doing homework, hanging out with my friends & family, playing with my dog and 2 cats, or playing on the Wii. One of my goals for 2010 is to compete in more Pro/Am events, and meet other girls that love to skateboard!!!