Hello everyone! My name is Andrea and I’m a new author at SkaterGirl. Danni made an interview with me a while ago, but for those of you who haven’t read it, I’m going to introduce myself. I live in Malmö in the south of Sweden and I’ve been skating a couple of years. Right now I work full time in the local skate park called Bryggeriet. I’m also one of the founders of No Limit and I spend a lot of time working with our local crew Tösabidarna (click the links for more info).

Enough about me. I thought I could tell you what’s up next in Sweden…

Next weekend Katta Sterner and My Magnusson invites skateboarding girls to come to Karlstad, a small city somewhere in the middle of Sweden. It’s going to be skate all day long and time to hang out and have fun.

On January 28th Katta Sterner and Anna Smideman will attack the vert ramp in Bryggeriet and they want to have company! Two days later Vert Attack, which is a big vert constest in Europe, take place in the same vert ramp. Great skaters from all over Europe will show up for this vert weekend. 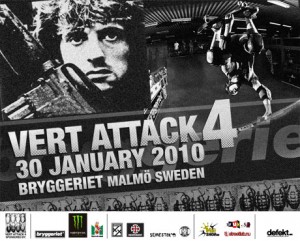 In February a group of swedish female skateboarders plans to go to Barcelona and skate for one week.

Other big contests that’s coming up in Sweden later this year are Millencolin Open, Betongcupen (concrete cup), and Lucia Classics.

That’s it for now. I’ll get back to you soon with more updates from Sweden.