Poseiden are excited to announce that after all the hard work of fundraising and also the generous support from industry they are embarking on their West Coast Tour (which actually kicked off a few days ago). The tour is travelling from San Diego and Los Angeles en route to San Jose and finishing up at, no less than, The Berrics!.

On the 27th the crew attended the Chili Bowl Contest which also included a Soft-Wheel Skate Clinic, Best Trick and a Timed Cruise Contest. Leticia Buffoni, Amelia Brodka, LaDonna Wiliam and Jen Valenzuela were all signed up to skate the Chili Bowl whilst Eliana Sosco and Jessica Florencia  competed on the street course. Isabelle Fried gave the younger generation skate tuition. Apparently this tour allows no time for parties as the Poseiden crew have such a jam packed timetable!

From there they will head on to Santa Cruz, where Isabelle Fried of Skate Divas has been gracious enough to set up a camp for the travellers. Poseiden, are also looking to make a stop at Barrios Unidos – “a non-profit organisation whose mission it is, to prevent and curtail violence amongst youth within Santa Cruz County by providing them with life enhancing alternatives”.

Keep an eye out for a full write up from the event. 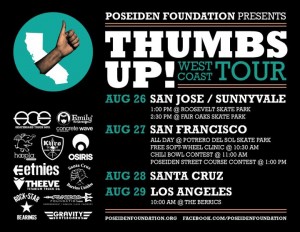 View all articles by Jenna